An introduction to Kinkade
Our Story

Since 1976 when Jonny produced his first guitar, he has held onto his original aspirations: “to practise the craft of hand building instruments to the highest standard attainable, producing guitars that are a joy to play, sound exquisite, are totally reliable and with a tone that continues to mature with age.”

Jonny always endeavours to ensure that the finished product surpasses all expectations. Over the many years Jonny has refined a very special skill of translating the sound the musician holds in their head. Most notably of all, Kinkade guitars become imbued with the character and soul of both their creator and their player, which is exactly why Jonny’s customers return for their next guitar, again and again. 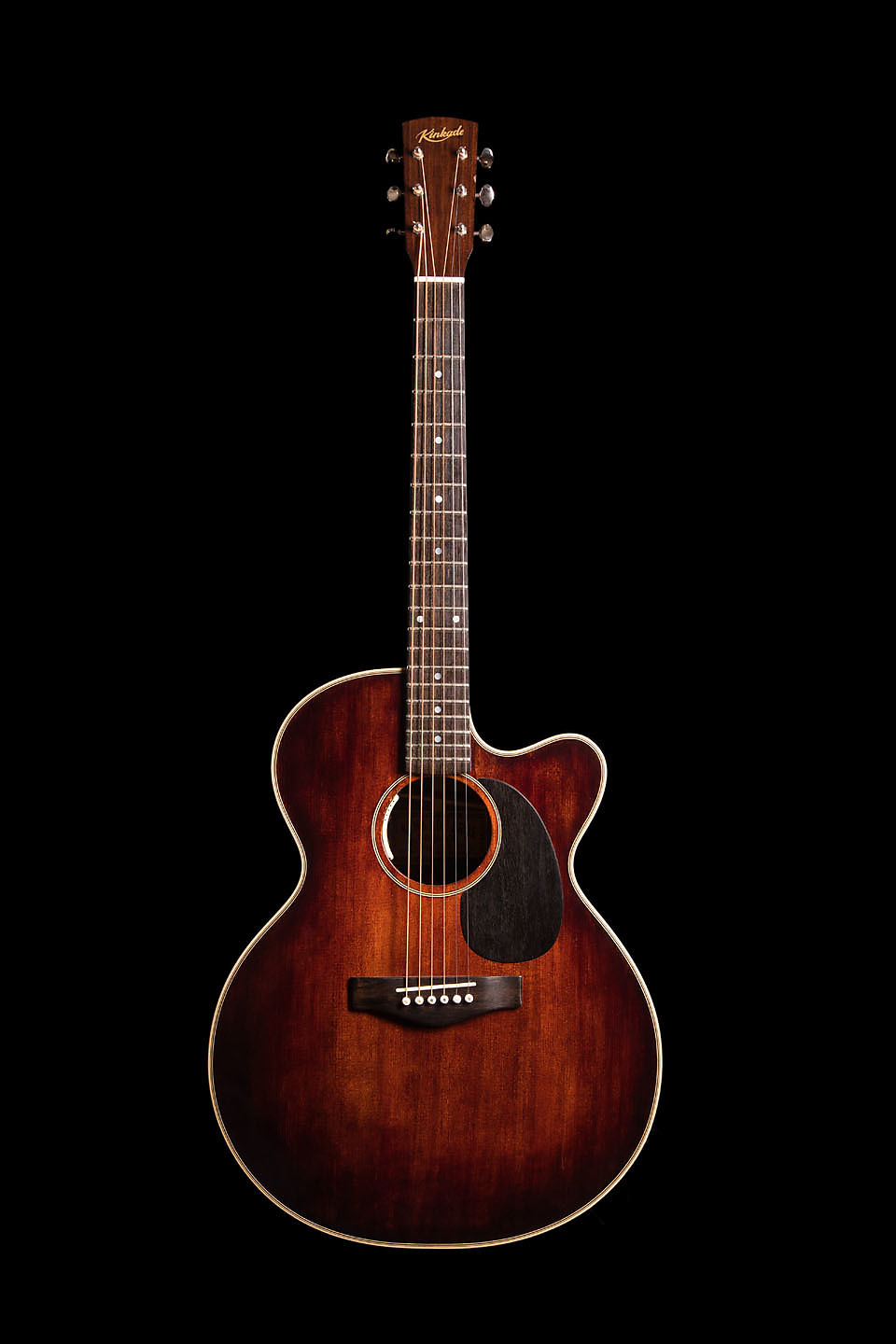 All Kinkade instruments are only constructed from solid, premium grade timbers known for their tonality, strength and beauty.

Materials for backs and sides are mostly Brazilian Mahogany, Indian Rosewood, Walnut or figured Maple/Sycamore. Koa, and Tasmanian Blackwood can be used, depending on availability.

Most guitar necks are constructed from Mahogany and have adjustable trussrods, soundhole accessible whenever possible.

A unique feature of Kinkade guitars is their solid wood scratch plate – usually a thin slice of walnut on flat top models, as it is light and durable.

See who we are in our Gallery.

What our customers say about us.

Jonathan Kinkead deserves his reputation as one of Britain’s foremost acoustic makers. In common with most small luthiers, Kinkead will build to suit. A spruce / flame maple Clifton, say? A cedar / walnut Cabot? Fancy cosmetics? You want it, you got it. And it should rank with the best.

I first met the Kinkade brothers, Jonny and Simon, in the spring of 1984 when they repaired and re-finished a favourite Gibson ES-335 of mine that had suffered years of abuse. I was so impressed with the job they did, particularly on the neck and frets, that I asked them to build a guitar for me, a monstrous solid-body creation of my own design. This they did, with their usual care and attention to detail, using top-quality timbers to produce an eye-catching, fantastic sounding instrument. As a player-collector of mainly vintage guitars, I seldom have cause to purchase new instruments. However, whenever I visit Jonny – usually to bring in or collect a repair – I’m always tempted by the sample instruments he has lying around in the shop. I’m never less than impressed by the pure tone and volume produced by his stock acoustics, which are a joy to play as well as listen to. Even his quirky Cubist Braque short-scale is perfectly playable and has tone! When I saw a rusty oil can with a neck attached to it on;his bench last year, I had to pick it up and play it. It sounded so great that I immediately ordered two, one for myself, the other for erstwhile band-mate Andy Partridge. Andy keeps his next to his favourite armchair, and plays it every day. Custom orders are never a problem, and Jonny enjoys the challenge of accommodating buyers’ personal requirements for their guitars. If you visit him, he’ll make a point of literally downing tools to give you his full attention, the needs of the customer being as important to him as the quality of the finished product. This same dedication to his craft applies to every aspect of it, from the building from scratch of an arch-top with exotic woods and intricate inlays, down to a simple nut job. After countless re-frets, dressings and; neck and body repairs, I feel very fortunate to have found a craftsman, nay artist, that I can call on to restore my guitars often to a higher standard than when they left the factory. And who knows, one day I’ll surprise him and order that opulent, abalone-encrusted Super 400 knock-off with gold-plated hardware, my name etched in mother-of-pearl down the fingerboard. When I’ve learned to play properly …

I’ve known Jonny Kinkead for years – he looks after his customers well. My guitar is a basic Kingsdown model, mahogany back and sides, rosewood fingerboard and spruce top. It’s finished in a dark reddish-brown sunburst which looks stunning. The action is superb, the workmanship second to none, Johnny is a perfectionist. This is a guitar made to be played – indeed Jonny likes to see them well played, even a bit battered! I’ve used it many times live without backup – none is needed especially with the reliable Fishman pickup. I’ve been playing 27 years, own another 20-year-old Kinkade, a baby Taylor, Harmony solid mahogany and a Fender Strat. This Kinkade is my number one. I would hate to lose this guitar – it was made for me for my 40th birthday to my specification – enough said.

I’ve been playing fingerstyle guitar for 30 years and bought a Kinkade Kingsdown in 1991, having heard of Jonny’s reputation from other players. His craftsmanship is second to none in my opinion and he makes only a handful of guitars each year. The beauty is that you can specify your guitar exactly and the result is as unique as you care to make it. Over the years I have bought, played and sold on many top line guitars (too many!) in an endless search for the Holy Grail. The plain truth is that, on either side of the Atlantic, I have not found another 000 sized guitar to surpass my Kingsdown in terms of craftmanship, playability or tone. It’s a delight. Don’t take my word for it- go play one of his guitars! Bristol’s best kept secret by a long way.

One of my guitars hand-made by Jonny Kinkead in 1991, is approximately OM sized. I also owned a 1987 Lowden which I still have and love, but this, Kinkade’ blew me away and I had to have it. It certainly bears comparison with handmade US guitars like Santa Cruz, which cost two or three times as much here. Jonny doesn’t like to get into fancy inlays – it’s all just simple but beautiful. Although I bought it off the shelf (a small shelf as he only makes about 25 a year) I had the chance to get it set up at the time. As it happens it was near perfect. Jonny said, ‘I just keep carving until it feels right’, so the actual wood has been chosen for sound. I’ve been playing for about 18 years, nearly half of them with this guitar. It is a reliable friend. If I had to get rid of all my guitars, I would probably keep this one.

Both inside and out, all the reference points suggest the builder is a man who truly loves his work

With this Kingsdown, Jonathan Kinkead fully vindicates his reputation as one of the country’s most accomplished luthiers and having played other Kinkades in the past, I know this is not a one-off. You’d be hard put to find better quality anywhere.

In my opinion, Jonny Kinkead produces some of the finest guitars around and is most definitely up there with the best. His guitars respond well to delicate finger style playing, as well as having enough headroom to handle in your face string bashing. With flawless workmanship inside and out, you’d be missing out in not playing one – so do your ears a favour. P.S. Ask about his new, Westbury model – highly recommended